The team was formed from members of the Highfield School football team who won the Midlands under 18 title during one year.
Alec Wortley’s company at the time Electracatch International sponsored the Highfield School 1st 11 team shirts at the school – see photo.
The 6 a side team was formed after Richard’s request and we played on Friday evenings at Sixes in Kingswinford.

The following players played in the teams over the 3 years. Initially we played in Newcastle United shirts but after a few weeks it was decided by team members to change the team shirts and it was agreed to change to the Dutch National Team shirts which are orange with black trimming. At the end these were given to the Manager of a youth team so hopefully they are still bringing good luck to the wearers!
Goalkeepers:
Rory Weatherstone John Hutton and Alec Wortley.
Team players:
Jason Hill, Richard Wortley, David Thompson, John Hart, Andrew Shirley, Lee Vickers, Gary Brown, Simon Hardall, Lee Sadler, Richard Showell, Paul Fothergill, John Nedrick, Levon Mullen, Trevor Bowater.

We won the Premier Friday night league 4 times and were runners up 4 times at Sixes in Kingswinford . Whenever we won the league the team were all invited to a night out with free drinks and dinner at a local restaurant. The photos show one such dinner held at the Harvester pub in Penn. Other dinners were held at Chinese and Italian restaurants in Wolverhampton and a good time was had by all. On one occasion the lack of a convenient toilet caused one player to obtain relief where he was standing and on another a decorative plant was removed by another player under his coat.

Often one team or another would be short of a player and one of the Six’s staff would play for us to make up the numbers. One of these was Big Dave who had a shot like a cannonball.

Here is a photo of the trophies we won: 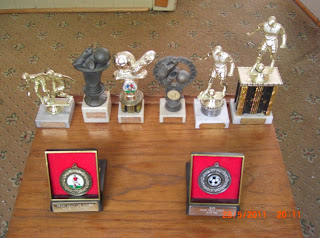 Posted by Alec Wortley at 13:05 No comments:

Dr Alec Wortley's website has nearly finished its current round of refurbishments. You can view the various pages at the following URLs, but watch this space for details of yet more updates to follow shortly:

A new page has been added to the website of Dr Alec Wortley's electrofishing equipment company Electrafish: